This first of a kind MOU aims at partnering on research, development and engineering of technologies that will enable NTPC to reduce the amount of coal fired in their units and gradually replace it by co-firing alternative fuels in the boilers - both carboneous (methanol, carbon neutral fuel such as agricultural waste, biomass, etc.) and non-carboneous (such as ammonia). This will make use of the huge existing infrastructure and require less new investments as compared to other decarbonisation options. Furthermore, as in India coal is the only widely available option for baseload power generation, it will help to reduce the carbon footprint of this source of reliable power, for decades in future.

As a primary goal, the collaboration is to support NTPC in co-firing of biomass pellets beyond 20% and up to 100%, as well as enabling the co-firing of methanol. It will also explore the possibility of introducing ammonia as a co-firing fuel, and develop, test and demonstrate technologies that allow a total co-firing with lower carbon fuels in coal fired power plants. 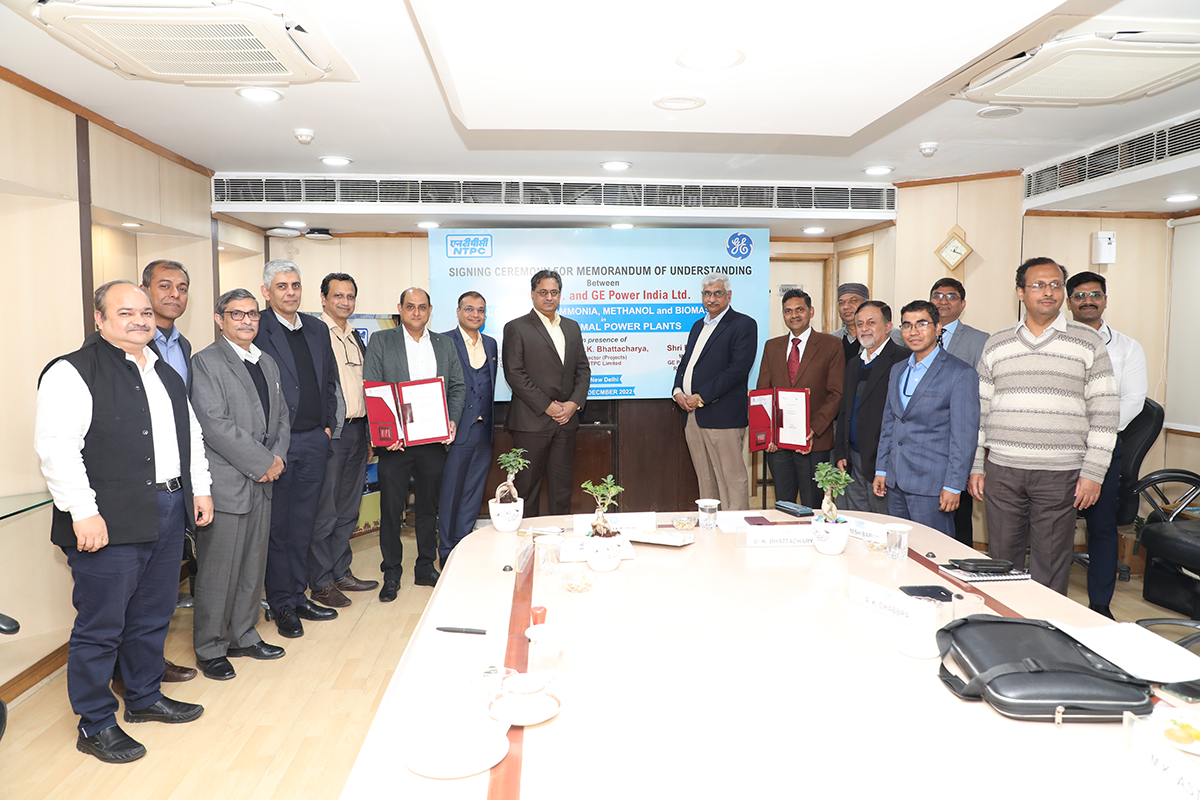 Ujjwal Kanti Bhattacharya, Director Projects, NTPC Limited said, “We are looking forward to working with GE Power India Limited as NTPC intends to minimize the carbon footprint of our 57+ GW coal-based units. We aim to decrease carbon footprint from our coal fired power plants by co-firing of alternative fuels such as carbon neutral fuel, Green Methanol and Green Ammonia. It will support our goal of reducing carbon emissions from our coal-based power generation, as part of NTPC’s The Brighter Plan 2032 that aims at setting new benchmarks in sustainability along the entire energy value chain in India.”

Prashant Jain, MD GE Power India Limited and RGM GE Steam Power said, “This MOU is in line with our country’s efforts to adopt advanced powering technology to decarbonize power generation. We are excited to partner with NTPC Limited on finding solutions to address carbon emissions, while ensuring efficient, reliable and affordable power generation. This is a huge stride in India’s energy transition journey as the country looks ahead to achieve its net-zero targets.”

GE Power India Limited (GEPIL) which is part of GE Steam Power is one of the leading players in the Indian power generation equipment market. Hydro and Gas business are also housed in GEPIL in addition to Steam Power. Today, with the expansion of economy, globalization, innovation, amidst political and economic challenges, GEPIL has successfully partnered in the modernization and growth of Indian infrastructure. It has a countrywide presence of sales offices and workshops. GEPIL’s manufacturing unit located in Durgapur, West Bengal and Noida. GEPIL continues to offer a comprehensive portfolio of power generation solutions with a focus on emissions control and services portfolio providing sustainable, affordable and reliable electricity: https://www.ge.com/in/ge-power-india-limited