In this article, we feature a recent conversation with Mike Manoucheri, P.E., president and CEO of Thermal Energy Corporation (TECO) of Houston, Texas.

Mike shared his thoughts and experiences on the advantages—and even a couple of challenges—of working with GE’s LM6000 aeroderivative gas turbine over the past several years.

What challenges were you trying to solve with GE Gas Power’s LM6000 gas turbine?

We serve 24.3 million sq ft of space in buildings owned by 17 institutions at the world-famous Texas Medical Center. Since they must have their chilled water and steam on at all times for their mission critical facilities, failure is not an option. The LM6000 was installed to help ensure a reliable power supply to keep TECO production online in the event of a grid outage.

We have a reliable grid source with high voltage transmission supplied to our substation. During Winter Storm Uri, we stayed online—and our LM6000 helped maintain service—but not everyone was as fortunate. When hurricanes and other severe weather events come through the region, our electricity provider does their best to keep TECO online, but in those uncertain situations there are no guarantees. So TECO’s LM6000 helps provide an essential protection for our customers, while at the same time increasing plant efficiency.

What benefits sold you on buying the LM6000 over others?

The size of the unit was a good fit for us, meaning the megawatt output as well as the footprint. There wasn't, in my view, another good offering in that size range when we installed the unit. GE has smaller and larger units, but the only real alternative at the time would have been multiple smaller units, which take up more space and are more costly to install.

There are many GE aero turbine units like TECO’s out in the fleet with long operating history and experienced users. So that really helps. These are complex machines, and many improvements have been implemented as the product has developed. Having a group of knowledgeable peer operators is valuable.

One more reason: We liked the convenience of visiting when these units were assembled and keeping up on the progress in person in the US. That relationship helps with service. There are plenty of techs to service the units in this area, so when we need service, they're available very quickly. Given our responsibilities, when we need help, we need it now—not two days from now. So, response time and proximity are important. 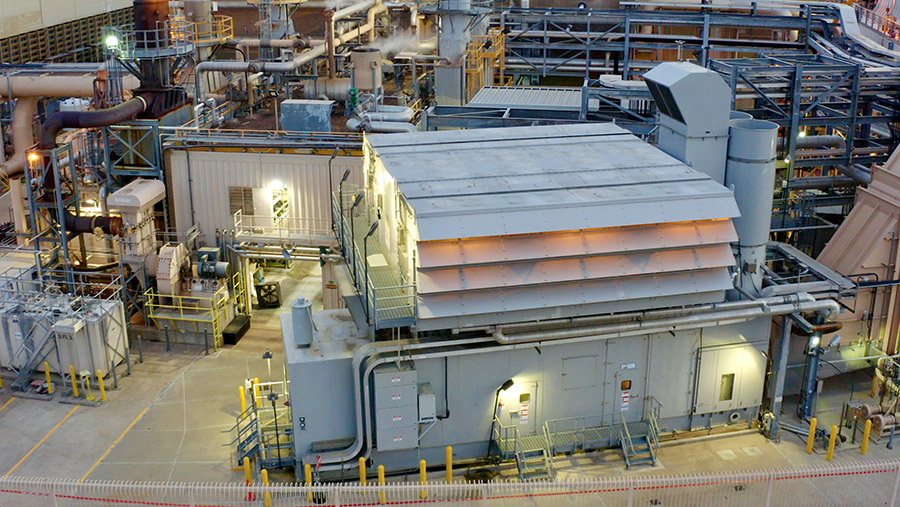 How has your business been measurably impacted since commissioning an aeroderivative gas turbine for your CHP power plant?

The overall efficiency certainly has helped our combined heat and power (CHP) facility; it has lowered our costs significantly over time.

We don't baseload the unit. We operate the unit as needed and at times sell power back to the grid during periods of high demand. The grid price is an indicator of grid stress/reliability. So as the price goes high, that's when we dispatch the unit. Again, reliability is our primary driver, but there is a benefit when we're able to offset our grid costs as well as be reliable.

As a not-for-profit, when we are more efficient, our customers benefit. If we have excess revenues, they will be used to help fund new projects or improve the plant. If there is excess power not used internally to support our operations, the excess goes to support the grid. This practice has helped lower our customers’ overall rates over time.

Is there any aspect of working with GE Power that has exceeded your expectations?

I would say our CSL (Customer Service Liaison). She has been our CSL a long time and she’s very good. Literally anything we have ever needed she's been able to help provide. She finds the right people and puts them into action. She responds quickly to get us an answer. She is aware of our inner organization and culture, and we always get a good response from her. Definitely the service we've received from GE through her has exceeded my expectations.

What’s one story of success that wouldn’t have been possible without our aeroderivative gas turbine?

I think the story about how we were able to operate throughout Winter Storm Uri in February 2021. We brought our LM6000 unit online ahead of the most severe weather and it ran through the entire storm event. In fact, it was the most runtime we had on the unit in one uninterrupted cycle.

TECO is known for forethought and planning. Reliability is our key driver, so we brought the unit online ahead of the event as a proactive operating procedure. Should anything go wrong in a storm, we can get ahead of it online and run through it. In this case, we didn't know Uri was going to be as intense as it ended up being.

The LM6000 achieves over 99/98% reliability/availability.

We were able to provide all the power needed for our plant to operate internally. Any excess power was put onto the grid. As I mentioned earlier, we do that routinely when the power grid is stressed. Uri was the most stressed the Texas grid had seen in a number of years. Maybe ever.

You'll keep hearing me say reliability—that's our focus. We produced all of our own electricity and exported power through that whole Uri event. So, in a small way, we helped support the Texas grid through that event. I'm sure that power went through to our customers and community, even though distribution is not something we control.

If a colleague were to ask, what is the recommendation you would offer about our aeroderivative gas turbine products?

This unit was one of the earlier units of its series. It's quite reliable now, but there were a few issues at the beginning. GE Gas Power is aware these units had a few growing pains and issued service bulletins.

Speaking about the unit today, I would probably say it’s an eight or nine out of 10. With gas turbines, the newest and latest models typically have the best heat rates.

We've had people come on tours that had an early unit and ask, ‘Ours tripped three or four times this week. What do you guys do?’ And you just have to investigate every one of those. Figure it out. If it’s a plant problem, fix it. If it's a GE problem, let them know and let them fix it.

On the positive side, there are a lot of these units in the fleet, which means there are other users you can work with. You can talk to other operators; some are highly skilled people. We can ask, ‘Have you ever seen this?’ Usually, someone in the community has seen a similar issue. There is a whole community of knowledgeable operators, there are forums, even conferences where suppliers like GE Gas Power participate. There's a large, involved user base, and you've got GE expertise. Between all these users and vendors, many with GE experience, there's usually someone who has seen your issue, so you're not out there by yourself.

Is there any feature about this unit that has been a keystone for your success?

First, we like the short start time. We have an HRSG on the back, so it's not as quick as a peaker unit would be, because we need time to purge the boiler and there are limits. But still, start time is an excellent feature that you advertise.

The LM6000 can deliver power from startup to full power in 5 min start time providing a faster frequency support control and grid support.

The other thing we really like is that we have a chilled water coil on our inlet, which is a particularly good fit with this aero unit. We’re a chilled water plant and require consistent output. Every time we run the unit, we get the same consistent, predictable output. You get a lot of bang for your buck cooling the inlet down to 45 degrees F here in Houston.

Want to see how much you can save?
Try out our new CHP calculator

Discover your savings with our CHP calculator Learn more about the reliable, efficient LM6000 Learn about the flexible and reliable family of LM 2500 gas turbines

Aero gas turbines can elevate your CHP facility—learn how!