Some parents of young children dream of the day their child walks across the stage to graduate from an elite university.

For some of GE’s gas turbine engineers, their pride-and-joy is the compressor section of a gas turbine—which provides high-pressure air for combustion of fuel and expansion in the turbine—and the massive achievement of surpassing 500,000 hours in operation reliably.

GE recently exceeded this milestone with the compressor used in our fleet of F- and H-class gas turbines, known as the Advanced Compressor. With 83 of these compressors now in commercial operation in challenging environments such as Saudi Arabia, Turkey and Pakistan, the design has exceeded expectations in performance, operability, and reliability. The compressor’s half a million hours include service on sub-stable grids where frequency variations can cause problems if compressors are less-than reliable. The Advanced Compressor has successfully operated under sub-synchronous grid conditions without causing any electricity outages. The compressor has withstood all these harsh conditions while delivering advanced levels of efficiency and operability.

The Advanced Compressor’s notable reliability can be partly credited to extensive testing at GE's validation test stand in Greenville, SC, where about 200 engineers push the compressor far beyond the boundaries it would ever experience in normal operations. The $250 million Greenville facility includes a complete natural gas supply so the turbines can run at full load while engineers run tests. The off-grid, full-speed, full-load test bed uses more than 4,500 sensors to measure how machines operate under extreme stress, such as running the turbine at 110 percent of rated speed, simulating a power surge in Turkey, grid fluctuations in Pakistan, or the extreme temperature conditions of Saudi Arabia. During testing, the compressor operated at ambient temperatures well beyond normal service conditions. By way of illustration, the graphic below highlights the difference between the conditions GE’s 7F.03 fleet has experienced in the field compared to how far these units are pushed during tests — the orange areas show real-life conditions while green areas show test stand operations. 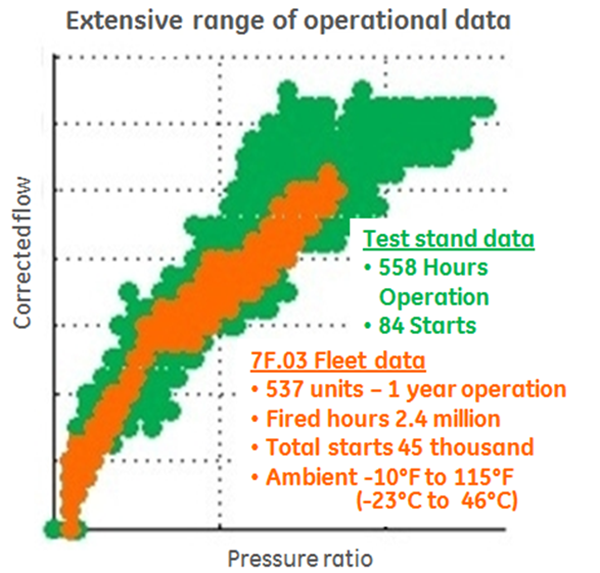 Reaching this 500,000-hour milestone caps a journey that began by building upon the achievements of GE’s 6C gas turbine, which entered service in 2005 and is now known as the 6F.01. A decade of subsequent improvements to that unit’s compressor and scaling to 3,600 RPM produced the 7F.05 turbine, entering service in 2014 as the first product to use the Advanced Compressor. Today, our high-efficiency 7HA.01 and 7HA.02 turbines also feature this special compressor.  A scaled version that operates at 3,000 RPM has been commercialized for the 9HA.01, 9HA.02, and 9F.05 gas turbines as well.

The evolutionary design draws on experience from 70 million hours of F-class compressor service and from scientific and technological advances made by engineers at GE Aviation and GE’s Global Research Center. Improvements to the compressor include 3-D aerodynamics, blades that can be replaced on site to simplify maintenance, and ‘super-finishing’ of materials to enhance efficiency and limit degradation. The same compressor has improved the power output of existing 7F.03 and 7F.04 units and has become the standard across GE’s highly advanced F- and H-class gas turbines.

In addition to the 500,000 hours, this compressor has now logged more than 8,800 starts without a major incident. See below for the number of units, fired hours, and starts.

All that is enough to make the GE team proud, no mortarboard required.