Did you know that the GE Monogram is one of the oldest corporate logo in history?

The exact origin of the Monogram remains elusive, but in 1892 - almost a full decade before the Monogram was trademarked—the Edison General Electric Company and the Thomson-Houston Electric Company merged to form the General Electric Company. It is believed the merged companies’ logo took its “G” from the “General” in the first company’s name and its “E” from “Electric” in the second’s. Originally used to market electric fans, the popular monogram soon became the symbol for all company products and publications.

Just as the Monogram has a long tradition, so does it’s placement at the GE campus in Schenectady, NY, home of the headquarters for GE Power. It is a story that follows the incredible growth of the company, the city of Schenectady, and developments in transportation history.

During its first twenty years, the Schenectady site experienced rapid growth and, as a new business, it was important to establish name recognition and distinguish the site from the other major industrial business in town, the American Locomotive Company. At the time, the main method of travel into the city was by rail, so it only made sense that early signs to identify the General Electric Company were located on buildings facing the New York Central Railroad line, as shown below on Building 16. 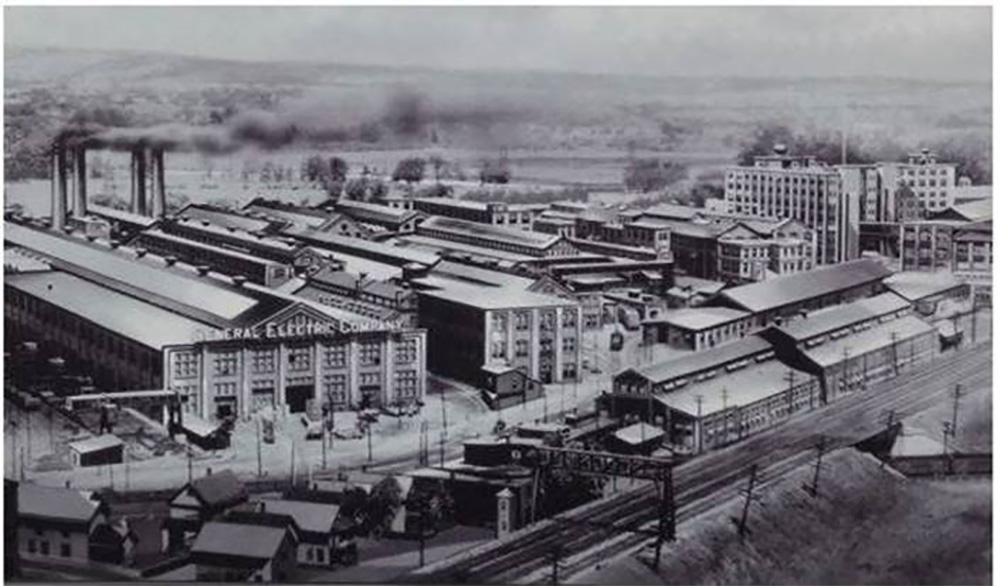 By the 1920s, as recognition of this new corporate logo grew, it began to appear on more GE buildings. Soon a large lighted logo would be constructed, but consistent with the placement of earlier signs, the new sign was located atop Building 40 to face the NY Central rail line. The sign included the call letters for WGY to advertise the new technology of radio that was originally transmitted directly from Building 40. 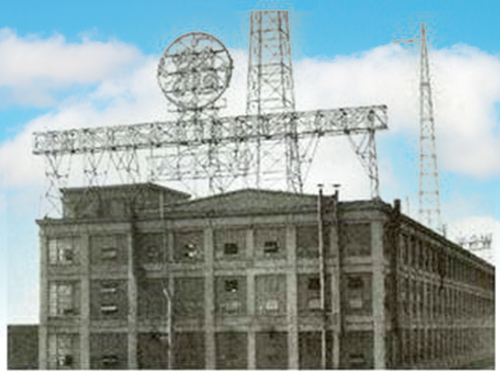 In 1925, GE expanded its Research Laboratory with the construction of Building 37. Noting changes in transportation with growing use of the automobile and the newly constructed Erie Boulevard and Western Gateway Bridge, a new sign was needed to face this new entry way to the Schenectady site. So a sign similar to the one on Building 40, but larger, was located on the roof of Building 37. First lit in May of 1926, the sign is now a beloved landmark.

The 168-foot-long sign with 36-foot diameter monogram is comprised of 1399 25-watt incandescent bulbs. Typically lit with clear bulbs, a time-honored tradition of changing the monogram to red and green bulbs in December has been practiced for as long as most locals can remember. The sign has also been changed to red, white, and blue bulbs for special events such as the U.S. Bicentennial in 1976, but has always been returned to the original theme of clear bulbs, which takes roughly 24 man-hours to changeover.

In 1949, construction was completed on the new manufacturing building for large steam turbine and generator, known today as Building 273. As an impressive state of the art facility, it would become known as the “Grand Canyon of Industry” as one of the largest manufacturing buildings of its type at the time. Once again, to identify this new building and expansion of the plant to the other side of the abandoned Erie Canal, a large sign was located on the back side of the building to face incoming traffic on local roads and, by the mid-1960s, what would become a major entry point to Schenectady: Interstate 890 from the New York State Thruway. 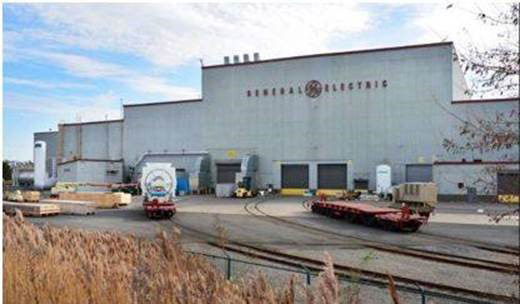 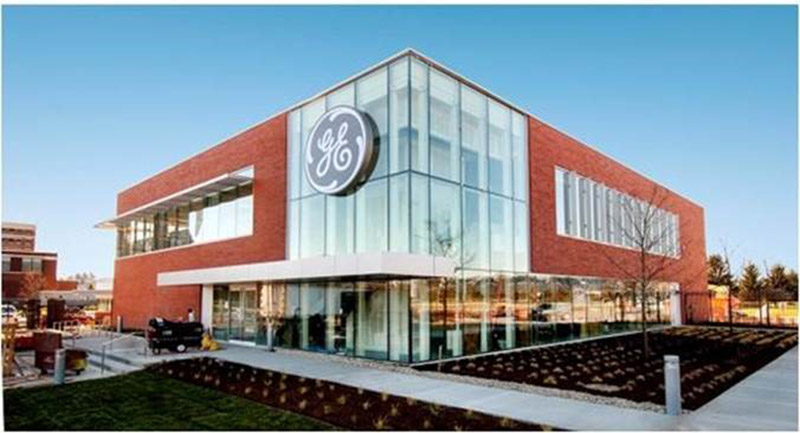 The famous Monogram on top of Building 37 is 36 feet in diameter, and each letter is 10 feet high.

Building 37 was GE's first building devoted to R&D and is recognized in the National Register of Historic Places as "the first truly industrial research facility in the United States."