When the Chinese government named the automotive industry a pillar industry for development, it seemed only natural that the Shanghai Automotive Industry Corporation (SAIC), China’s largest passenger automobile manufacturer, and General Motors (GM), the world’s largest full-line vehicle manufacturer, would team up to form SAIC-GM.

Before the first Buick rolled off the line, SAIC-GM selected the diversified services, technology and manufacturing company — the General Electric Company — to unlock a $65 million turnkey communication and control and power distribution system, as well as provide process equipment and support, that would actively support GM’s production practices. With GE's automation team in the driver's seat, GE Electrical Distribution & Control was soon riding shotgun, together designing a state-of-the-art communication and control and power distribution system to operate within GE’s overall communication plan.

SAIC-GM’s TCS controls the movement of vehicle bodies into and out of the body distribution center using several modes of operation from fully automatic to fully manual. Like the PMC system, the TCS also employs CIMPLICITY software, but with the added feature of Tracker — a comprehensive CIMPLICITY option that provides tracking and routing control of the serialized vehicle bodies as they move through the production process.

With Tracker, SAIC-GM can dynamically collect and store a variety of vehicle body data, including process parameters, time stamps, and quality measurements. Operators can easily determine the location of a tracked vehicle body, display its data, and provide control commands to production equipment to process and route the body. Communication to Automatic Vehicle Identification system and Conveyor controls is supported over the plant Ethernet network.

In addition to tracking vehicle bodies, CIMPLICITY determines where to store vehicle bodies arriving from the body shop, sequences vehicle bodies into the paint shop, decides where to store vehicle bodies returning from the paint shop, and again sequences vehicle bodies into general assembly. The TCS and similar routing control systems are used extensively in automotive facilities to efficiently and effectively control vehicle flow based on parameters such as production schedule, optimum color blocking, consistent load balancing, and material availability. For SAIC-GM, the TCS effectively optimizes production flow and productivity and, due to its efficiency, minimizes paint costs and reduces paint emissions.

The plant’s Automatic Vehicle Identification (AVI) System identifies and tracks vehicles in the body shop, paint shop, and general assembly shop. Vehicles are identified by writing vehicle identification and configuration data to radio frequency (RF) tags mounted on each vehicle carrier. Vehicles are tracked by reading the vehicle data from the RF tags as they move through the production process.

There are two independent AVI systems; one is for the body shop and body distribution center (BDC), and the other is for the paint shop. The body shop/BDC system consists of one PLC networked with eight tag read/write stations located in the body shop, body distribution center and paint shop exit. Two of the stations in the body shop have automatic bar code scanners that read data from a label affixed to the body so that it can be uniquely identified by the AVI system when it enters the production stream. The paint shop AVI system also uses a PLC with 14 tag read/write stations. Each system controller interfaces with its own CIMPLICITY HMI-based operator station mounted adjacent to the associated system controller. The stations are available for system monitoring, maintenance, and supervisory control functions.

Each AVI system also communicates directly with the TCS and SGM’s FLEX system via the network, reporting vehicle locations and vehicle data to both. The AVI system also receives data from the FLEX system for storage on the RF tags. This data is read from the tags by other systems and is used for controlling the production process.

The Quality and Material ANDON System consists of two similar but separate subsystems. The Quality ANDON subsystem enables factory personnel to request help when a product or process quality problem is identified. Help is requested by pulling cords located along the production line. The action of pulling a cord sends a signal back to the operator interface, illuminating a section of a large display called an ANDON board that indicates where the problem exists along the production line. The Quality ANDON subsystem supports the synchronous manufacturing principles of producing quality products utilizing in-station repair rather than final process repair.

The Material ANDON subsystem allows each production area to automatically or manually request material before inventory is completely consumed. Factory personnel manually request more material by pressing a button. Material can also be requested automatically by sensors that detect a minimum inventory level. The manual or automatic request sends a signal back to the Material ANDON System, which displays the request in the material storage area. Fork truck drivers then deliver the requested material to the location, again supporting the synchronous manufacturing principles of just-in-time delivery.

Both the Quality and Material ANDON systems feature built-in tracking and reporting capability that compiles the number of ANDON calls, the number of line stops, and the resulting downtime. Problems are detected and resolved quickly and inventory is minimized. As with the PMC and TCS, the ANDON system avoids the high cost of idle equipment and people due to production problems and drastically reduces the opportunity for poor quality and rework. 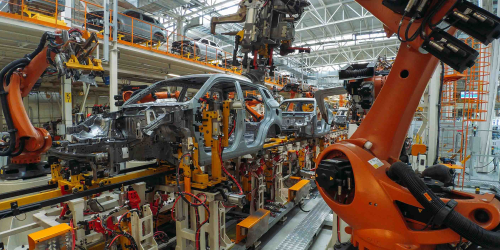 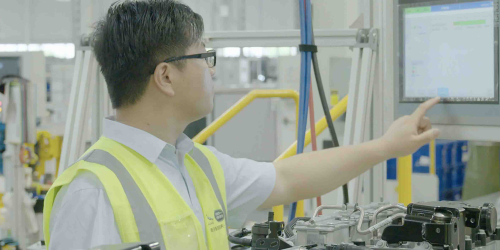