A Treat For The AvGeeks: An Inside Look At GE's 3D-Printed Aircraft Engine | GE News Skip to main content

A Treat For The AvGeeks: An Inside Look At GE's 3D-Printed Aircraft Engine

People have used 3D printers to produce a surprising range of items — fidget spinners, prosthetic limbs, even houses — but a new turboprop engine sets a new bar for what can be achieved through additive manufacturing. More than a third of the components in GE’s advanced turboprop (ATP) engine, rated at 1,300 shaft horsepower, will be built through additive manufacturing methods, a catchall term that includes 3D printing. The engine will power Textron Aviation’s upcoming 10-person business aircraft, the Cessna Denali.
GE brought a mock-up of the engine to the EAA AirVenture event in Oshkosh, Wisconsin, the world’s largest gathering of pilots and aviation enthusiasts, which opened on Monday. It will begin testing it later this year. The anticipation is growing as the engine moves closer to a scheduled 2018 test flight. “It’s revolutionary,” says Gordie Follin, head of engineering for the ATP program. “The engine is using state-of-the-art technologies that we have validated in our large commercial engines. We are introducing them for the first time in the turboprop market.”

The ATP is a treat for engineering and aviation geeks. It includes 3D aerodynamics, variable stator vanes, and fully integrated digital engine and propeller controls. “We are enabling Textron to provide a larger and more luxurious cabin with the same range and cruise speed that their customers expect,” Follin says. “At the same time, the pilot will be sitting in a simplified, jet-like cockpit.” 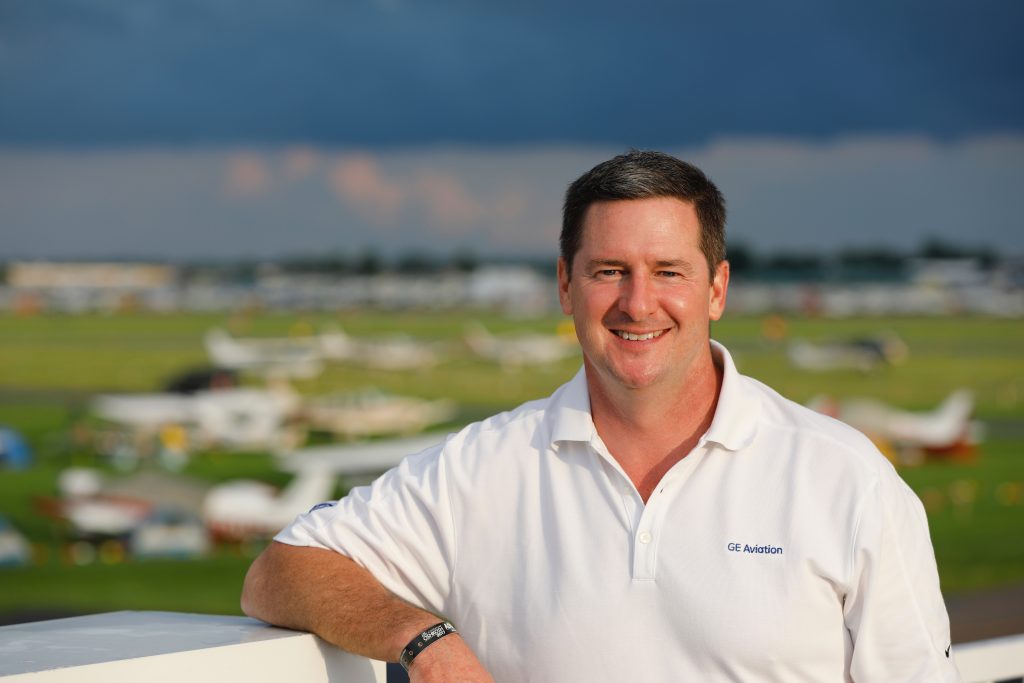 The engine is using state-of-the-art technologies that we have validated in our large commercial engines," says GE's Follin. "We are introducing time for the first time in the turboprop market.” Image credit: Tomas Kellner/GE Reports.

The result of more than a decade of research and development, GE will produce parts of the engine through several processes pioneered by company, including direct metal laser melting. These techniques produce an engine with approximately 30 percent fewer parts than a conventional turboprop while reducing the number of steps and inspections involved in the engine’s manufacture. The design also eliminates the risk of losses and leakages from joints — by eliminating the joints entirely.

“This is not a matter of simply replacing one production method with another, but of reinventing the way aviation engines are conceived and designed,” said Giorgio Abrate, engineering lead at Avio Aero, the GE subsidiary that developed the ATP.

In addition to being the first engine developed extensively through additive manufacturing, the ATP is also the world’s first “digital native” aviation engine. Rather than relying on 2D schematics, the ATP’s designers used advanced 3D modeling. Sensors in the engine will gather data and allow users to build a so-called digital twin of the ATP. This virtual model of the engine will factor in wear based on real conditions, help operators predict the right time for maintenance and keep the plane in the air more. The engine will also be equipped with technology that will allow pilots to fly the ATP-powered Denali plane like a jet, controlling the engine and the propeller with a single lever.

Inside the engine, the combustion chamber and numerous structural elements will be created using additive techniques, which, far from being a gimmick, will result in a simpler, lighter and more compact engine with an industry-best 16:1 overall pressure ratio (OPR). This enables it to deliver 15 percent lower fuel burn and 10 percent higher cruise power compared to competitor offerings.

In total, additive manufacturing is responsible for 13 of the Denali engine’s most critical components. These include the ATP’s power gearbox, one of the first of its kind to feature an additive main housing. The additive process enabled design engineers to explore directions that were previously unavailable, such as the use of new alloys.

The additive process was also used in the design and production of the ATP’s combustor, which was built around a reverse-flow configuration to minimize length while improving overall engine weight and installation. The approach allowed engineers to prototype and test numerous design concepts, a process that would have been too time-consuming and cost-prohibitive through conventional manufacturing.

The ATP product development team is based in Italy, Poland, Germany and the Czech Republic. Full production of the engine is slate­d to begin next year, with the Cessna Denali projected to hit runways by the end 2019.