At first glance, the line of cheerfully colored plastic skulls atop professor Laurent Lantieri’s bookshelf might be out-of-season Halloween decorations. But a closer look reveals something less than cheery: jagged holes, missing jaws and crumpled eye sockets. The skulls represent something very real — injuries that Lantieri has fixed.
Only the most seriously injured — whether by trauma or disease — end up in Lantieri’s office at Paris’ Georges Pompidou Hospital. The plastic surgeon has been repairing deformities since 1994. In 2010, he and his team carried out the world’s first full face transplant.

Lantieri does more than mend broken bones; he tries to help his patients look as close to normal as possible. In the past, he spent long hours in the operating room, opening hundreds upon hundreds of boxes of generic plates, casts and screws, searching for the best fit for patients. Despite his painstaking work, he often felt frustrated because of the off-the-shelf parts he had to use: “Before we were just guessing, trying to do it with the CT scan and using standard material … it was complicated, we never had the correct, perfect shape.”

That’s starting to change. Today, when Lantieri heads into the OR, he has a customized repair kit tricked out with titanium plates that are exact replicas of the patient’s own bones and screws that have been hand-fitted to secure existing bones to the new replacement parts. 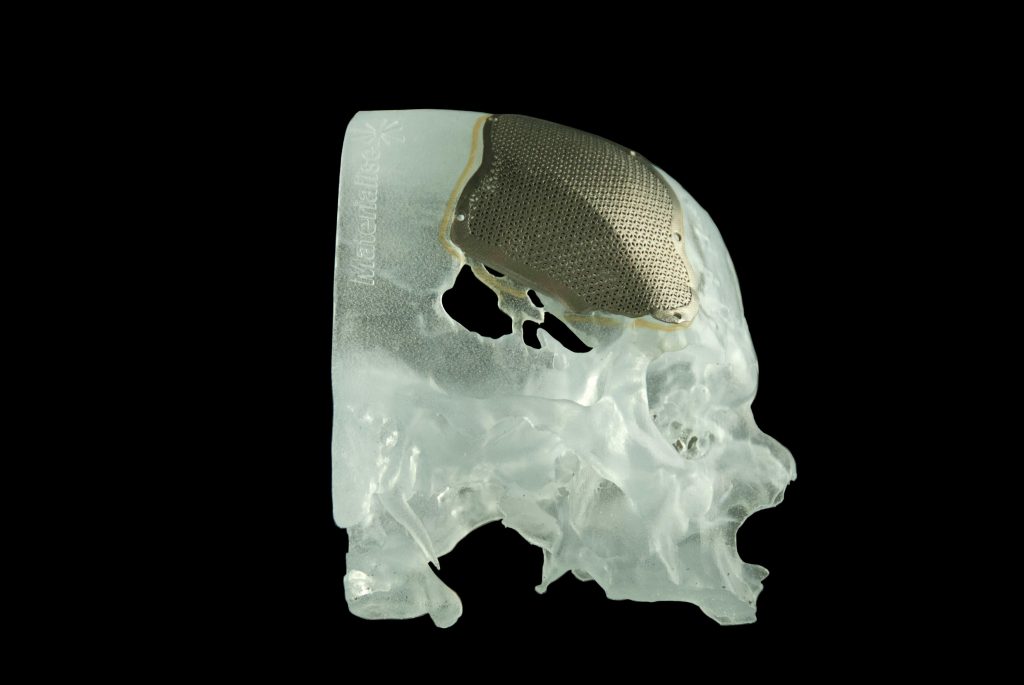 Top and above: Belgian additive manufacturing and design company Materialise uses a virtual 3D model of the patient’s face, based on a CT scan, as a guide to build patient-specific implants to replace damaged bones. Images credit: Materialise.

Since 2008, he has been working with Materialise, a Belgian additive manufacturing and design company, to build better parts. Using a 3D CAT scanner, Lantieri creates a 3D scan of a patient’s face. Materialise clinical engineers then use a virtual 3D model of the patient’s undamaged bones, based on a CT scan, as a guide to build patient-specific implants that replace the damaged bones. A shattered cheekbone on the left side of a person’s face is replaced with a mirror image from the right side. A destroyed orbital socket can be made whole by matching it to the remaining socket.

Once the model is approved, Materialise uses Concept Laser 3D-printing machines to “print” the new implants — first as a prototype that Lantieri can measure against a 3D model of the skull to ensure a perfect fit, and then as the final product.

“In the past, I was just guessing,” Lantieri says. “We never had the correct shape. But using 3D-printed skulls — to have them in my own hands — to determine what are the difficulties, where are the impediments in advance, it makes a huge difference.” 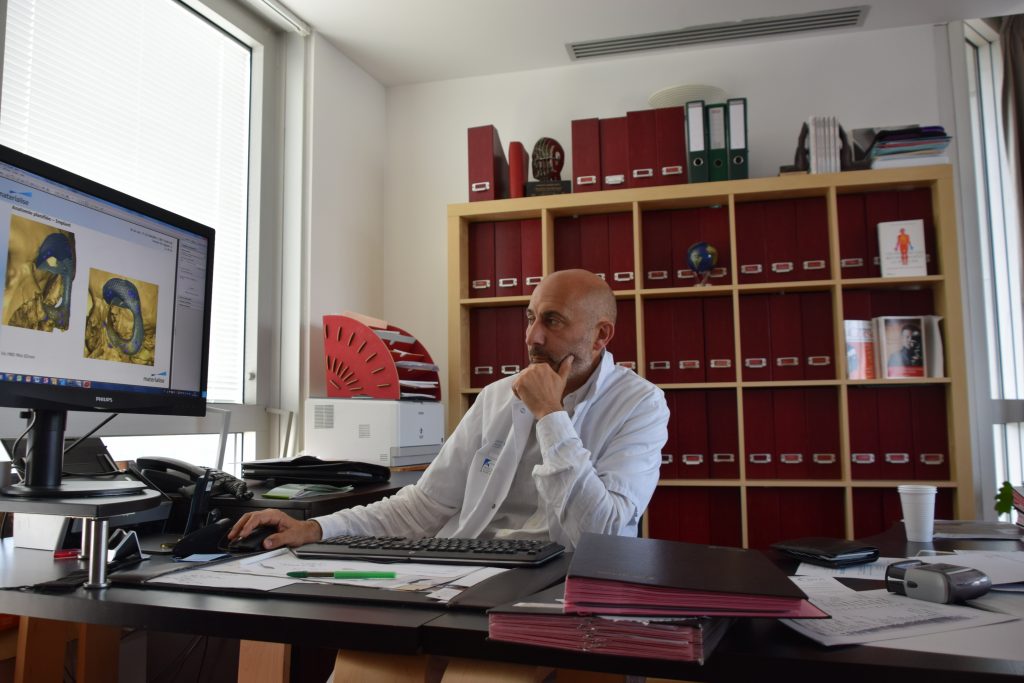 Laurent Lantieri, a plastic surgeon at Paris’ Georges Pompidou Hospital, says the custom-built parts help him achieve his ultimate goal: “We’re trying to give back normalcy to the patient.” Image credit: Materialise

The 3D printers build the parts from titanium powder. Lasers melt the powder and shape it into each patient’s one-of-a-kind “bone.” No matter how jagged the edge of the remaining bone is, the printer can make an exact match. Some replacement pieces are extraordinarily complex, such as those made to replace bones ravaged by disease. Because the pieces are going into human bodies, they need to be flawless.

“We are trying to be as close as possible to the original face,” Lantieri says. “We’re trying to give back normalcy to the patient.”

Concept Laser’s LaserCUSING machines use multiple lasers, which enable them to print faster and more cost-effectively than other 3D printers.

Once removed from the printer, the pieces are hand-finished before being matched with screws, and even screwdrivers, in a specialized kit.

“The OR nurses love them (the kits),” Lantieri says. “They just have to open the box and we have all the different elements in order of use. No more boxes. We save time because we know exactly what we have and where it goes. Everything is exactly what I want and what I need for each step.” 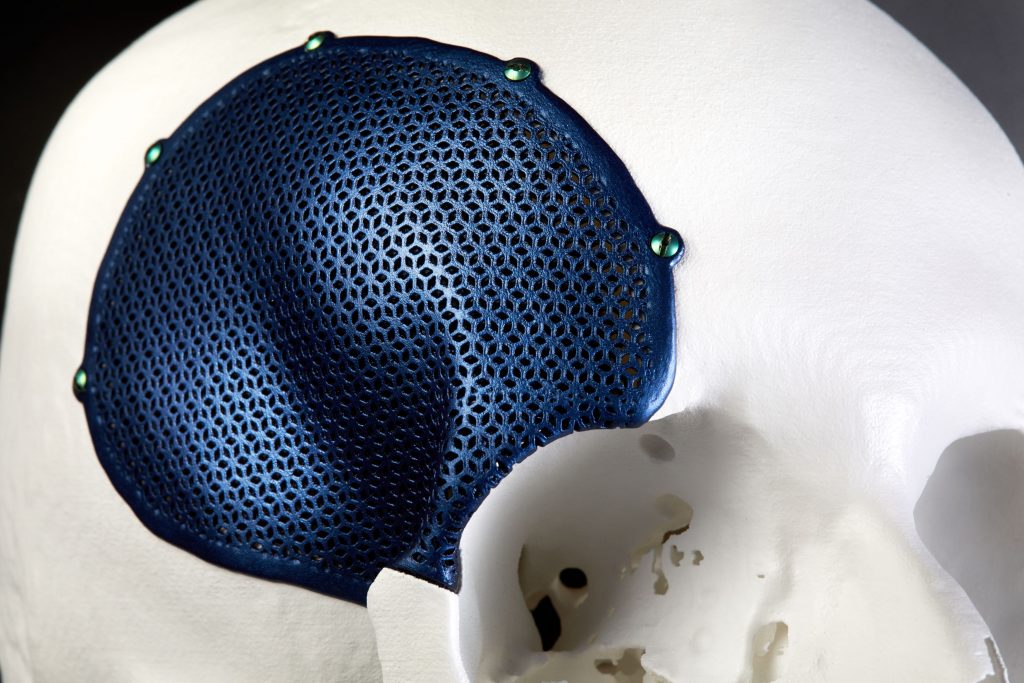 “In the past, I was just guessing,” says Lantieri. “But using 3D-printed skulls — to have them in my own hands — to determine what are the difficulties, where are the impediments in advance, it makes a huge difference.” Image credit: Materialise

Although the 3D-printing method means spending more time in the planning stages, it makes the operation itself much quicker. That’s good for the patient, the doctors and the pocketbook. Less time in surgery means less expense.

The use of 3D printing for reconstructive surgery will only grow in the future, Lantieri says. “The outcomes are so superior,” he says.