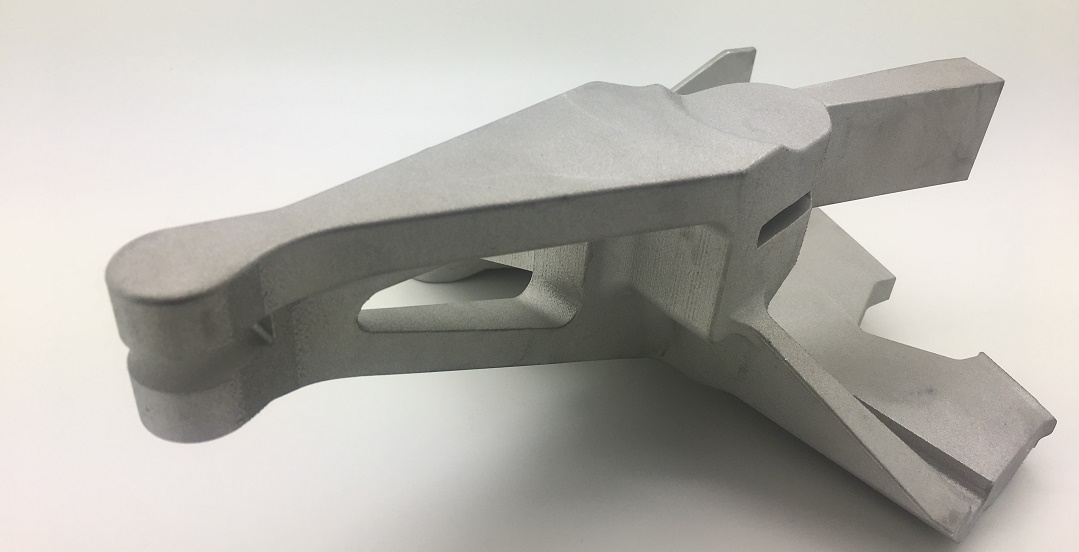 The PDOS is used on the ground to open and close the fan cowl doors to enable access to the fan compartment for maintenance reasons.

The original PDOS brackets on the GEnx-2B engines were produced from a solid block of metal, using conventional methods such as milling. This technique resulted in around 50 percent of the material being wasted.  Now using direct metal laser melting (DMLM) additive technology to manufacture the new brackets, waste has been reduced by as much as 90 percent.

GE Aviation has also improved the design to reduce the bracket’s weight by 10 percent.

The decision to mass produce using a cobalt-chrome alloy over a traditional nickel-based superalloy has enabled a faster build. To make this approach as efficient as possible, four brackets will be printed at the same time.

Using a bespoke, interlocking design to house all four brackets on a single build plate, the Concept Laser M2 cusing machine’s pair of lasers can print an aircraft’s worth of brackets in one build, before post-processing and inspection.

All in on Additive

“We chose this project because it represented several firsts for us. It’s the first program we certified on a Concept Laser machine. It’s also the first project we took from design to production in less than ten months,” said Eric Gatlin, general manager, additive integrated product team, GE Aviation.

“To ensure the M2 cusing machines were certified to meet the strict requirements for the aerospace industry, collaboration on this program has been closer than usual with our colleagues at GE Additive. As we continue thinking about the many parts we can design,  redesign and manufacture on GE Additive machines, I’m looking forward to putting both our teams and the technology through their paces,”  Gatlin added.

“It’s been outstanding to watch teams from GE Aviation, GE Additive across the US, Mexico and Germany collaborate. In such a short space of time, they have really excelled with the PDOS bracket and achieved a truly groundbreaking success .  Seeing the M2 machines produce flight quality hardware, and demonstrating what it is truly capable of, is another great milestone in our own additive journey,” said Jason Oliver, President & CEO, GE Additive.

If you are a member of the press and have additional questions, please contact us by e-mail.

Speed & Scale in the Spinal Sector