Additive manufacturing methods of 3D printing are increasingly opening up new paths in medical technology. Alex Berry, founder of Sutrue (UK), and Richard Trimlett, consultant at the Royal Brompton Hospital, are focusing strategically on AM for applications in cardiology. Is it possible to improve the “golden hands” of an experienced heart surgeon? Yes, it is. Using the example of a machine for performing sutures during operations and a cardiac stabilizer for endoscopic heart operations, Sutrue shows how operations on the heart can be performed more safely. Heart operations are soon to become faster and safer. And there is even more good news: patients are recovering faster.

Sutures following operations are still stitched up today in almost the same way as they were in the days of the ancient Egyptians. Alex Berry discovered that around 240,000 medical professionals a year globally suffer needlestick injuries as a direct consequence of this stitching. Even experienced operators are confronted with the drawbacks and inaccuracies of previous suturing methods. To change this trend, Sutrue developed an instrument which automatically passes any curved needle with a suture through the tissue of a patient. The requirements placed on the automated suturing device were that the stitches are made quickly, are positioned precisely, are reproducible and are made with the necessary force. The better and more quickly the suturing can be performed, the shorter the operation is for the patient as well. And a clean stitch also leads to better recovery.

The perfect mechanics of an automated instrument: Suture quickly, reproducibly and cleanly in a heart operation
The extremely slender suturing device is inserted via a conventional endoscope the size of a drinking straw during the heart operation and moved into position. Its head can rotate and be pivoted in order to find any desired batch of tissue. The needle rotates softly and with pinpoint precision during suturing. This is possible thanks to a complex miniature gear mechanism that drives the needle. The entire gear mechanism is an AM assembly. What this innovation actually means for the operator is that the suture is pulled through quickly and cleanly and the stitch is automatically set in place. A few small stitches in arteries or in delicate structures are now possible. Each stitch can be performed with reproducible accuracy using the suturing device. Complicated operations in particular can be performed faster and more safely. Thanks to the suture device, up to three rotations of a needle per second are now possible, instead of one stich per 25 seconds while doing by hand. This reduces the risk associated with the operation for both, patients and surgeons. 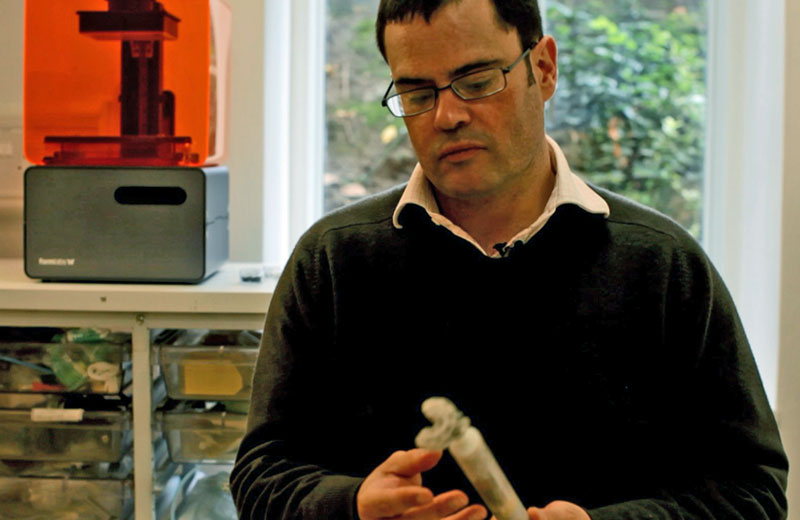 Idea of stabilizing the heart muscle during the operation
In Great Britain alone, around half a million people live with a heart defect. Treatment with drugs only delivers very minor improvements to patients and often an operation on the heart is the only way to save a person’s life. In Great Britain, cardiovascular disease is the second most common cause of death, accounting for 27% of deaths, after cancer, which accounts for 29% of all deaths. During open-heart surgery, the surgeon needs the heart muscle to be stabilized for an intervention to be made. Richard Trimlett outlines the task: “We're doing a beating heart operation so the heart is in use by the body but we need to hold the small area that we're working on still. With the chest open we can put a big suction device in but when we're doing keyhole surgery we need very small parts that we can pass in and out. What we don't want to do is disadvantage the patient by offering them an inferior stability of the heart so that the quality of the operation isn't as good when you do it as a keyhole. I said to Alex, 'could you make something that comes apart in pieces, pass through a very small incision that we can use to hold the heart stable? Could we make it to throw it away and even customise it to the different shapes and sizes?’” For Richard Trimlett it was clear that the heart stabilizer should be small, be capable of being dismantled, and be designed with exposed channels pre-assembly. The role of the stabilizer is to keep the heart muscle still at the precise point where the surgeon wants to make an intervention. Alex Berry took on the task and presented a biocompatible prototype of the heart stabilizer: one part made of plastic (SLS) and one part made of metal (Laser). The component consists of a rod on which the U-shaped heart stabilizer is inserted, like a stamp. The surgeon presses the stabilizer onto the operating site that he wants to keep still to make an intervention.

Short development time and care for the patient
The heart stabilizer was successfully developed in just three months. Previously, it was not uncommon for such a new development to take up to ten years. The component itself is printed by ES Technology on an Mlab from Concept Laser in the space of three to four hours. It consists of a metallic basic body and several plastic suction points that aspirate by means of a vacuum. Both parts are joined together using a sandwich technique. “The solution is estimated to have cost only around £15,000 to develop.

Comparable conventional developments used to cost upwards of a million pounds,” says Berry to illustrate the relative sums involved. But from Richard Trimlett’s point of view, it is primarily the patient who benefits from the new instruments using in heart operations. Here he cites an average rehabilitation time for the patient of around six months following a conventional surgical intervention. “Initial experience indicates,” according to Richard Trimlett, “that patients undergo a demonstrably gentler procedure and can recover after just three to four weeks.” 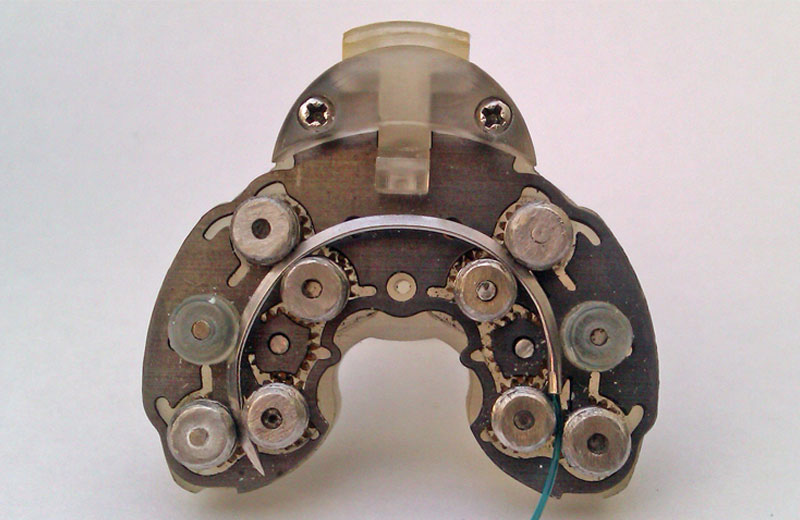 Cooperation between surgeons and Sutrue
The Sutrue Team have been involved in the development of medical operating equipment for more than 10 years. A precise analysis of the operating method is absolutely essential to allow suitable medical instruments to be developed. To achieve this, surgeons work together closely with expert medical consultants, such as Richard Trimlett. Trimlett, who is a cardiologist, attempts to translate the specifications and wishes into a specific set of requirements. With Alex Berry from Sutrue, he has access to a manufacturing expert who transfers the requirements into CAD designs and geometries. Sutrue has been working with AM methods for around (ten) 7 years. “AM makes it possible to produce geometries that cannot be achieved using traditional manufacturing methods. In addition, the parts have greater performance capacity or functional precision, or else they are extremely delicate or small. This is often precisely what the surgeon was previously lacking,” explained Alex Berry.

Sutrue relies on machine technology from Concept Laser
ES Technology, Concept Laser’s UK distributor, manufactures the parts for the automated suturing device on an Mlab machine using the Laser process, also known as 3D metal printing. The Mlab is particularly suitable for manufacturing delicate parts where a high level of surface quality is demanded. The special thing about the compact machine is its very user-friendly, pull-out drawer system that is very safe at the same time. This includes both the build chamber with dose chamber and the storage container. It allows a rapid change of material without the risk of any contamination of powder materials. The patented drawer system is available with three different sizes of build envelope (50 x 50 x 80 mm3, 70 x 70 x 80 mm3, 90 x 90 x 80 mm3). Also available now is its “big brother,” the Mlab 200R, which allows even greater productivity thanks to a doubling of the laser power from 100 watts to 200 watts. In addition, a larger build envelope has been created and this increases the build volume by as much as 54% (max. 100 x 100 x 100 mm3).

In this case, the machine technology from Concept Laser makes it possible to produce the teeth of the gear mechanism, which are just 0.4 mm long. Up to 600 parts can be printed on one single build plate. After the tooth system has been removed from the powder bed, it does not require any finishing thanks to the very high accuracy of the metal-powder-based process. Stainless steel 316L is used. Alex Berry explains: “In addition to the restrictions on geometry, conventionally milled or cast parts have a few other drawbacks. It takes a great deal of time to get to the finished prototype. In addition, the costs are very high. In 3D printing the parts are produced very quickly and at a fraction of the previous costs of prototyping. But the potential for bionic designs, reproducibility, miniaturization and not least the reduction in the number of parts and outlay on assembly is also vast. If one looks at the full spectrum of optimizing manufacturing and product design coupled with an increase in functionality, 3D printing is capable of revolutionizing medical instruments.”

Outlook
Richard Trimlett and Alex Berry already see an even greater challenge on the horizon. The buzzword is artificial hearts, that is to say mechanical pumps that perform the function of the heart. The previous models have weaknesses. AM could lead to new thinking in this area. The pump could be designed to be smaller. The really intriguing thing, according to Richard Trimlett, is the possibility of integrating electromagnetic functions for moving the pump. These are just a few of the basic considerations for redesigning mechanical heart pumps. AM seems to be inspiring the experts in the field of cardiology.