Founded five years ago by Martin Hofer und Adrian Gallmann, the company continues to scale up and build a solid reputation for itself as a metal additive innovator. It is regularly sought out by the aerospace sector and customers in the tooling and machine industries, as well as other more atypical collaborators.

One such collaborator is AMZ -- ETH Zurich’s Formula Student racing team.  AMZ’s first three race cars built were powered by internal combustion engines, before the team turned its attention to electric racing cars a little over a decade ago.

“We actively seek out collaboration with universities and the academic community.  Momentum and interest for additive continues to grow across our manufacturing sector, which is great,” said Martin Hofer, co-founder of AM Kyburz AG. “However, we really enjoy working with students. especially the openness and the willingness to disrupt and the challenge convention that it brings.  It keep us on our toes, and this next generation of Swiss engineers and materials scientists will take additive to the next level – not just at home, but internationally, as they enter the workforce.”

After a previous failed attempt in 2018, AM Kyburz and AMZ went back to the drawing board. They have been working closely over the past two years on the design and topology optimization on the third-generation upright and also a brake caliper.

In particular, the shape of the integrated cooling channels had to provide the best possible, most efficient cooling for the electrical motor, serve as a load-bearing structure and be suitable for the intended installation direction.

And of course, with any motorsport application, light-weighting is always front of mind. Students from ETH Zurich and the Lucerne University of Applied Sciences and Arts used simulation tools to develop the best possible variant. The topology-optimized connection not only had to withstand the stresses and strains of driving, but also had to be sufficiently rigid for mechanical reworking.

The corresponding load cases were taken into account in the simulation. The ideal jacket cooling on the engine and the topology-optimized connection of the upright to the suspension are the explicit advantages that were made possible only by additive manufacturing.

Thanks to strong collaboration, the team, often working to tight deadlines, was able to significantly improve the wheel packaging. However, the much smaller space inside the rim and the reworking of the complex shapes posed particular challenges for the polymechanics experts charged with precisely positioning the components.

With the design and topology work completed, and aluminum chosen as the most appropriate material for the application, the team at AM Kyburg reworked AMZ Racing’s concept and moved to production and additively manufacturing the components on one of its two GE Additive Concept Laser M2 systems with dual lasers and advanced gas flow management.

The team was able to nest two components on the M2’s 250 x 250 mm build plate.  The build time was around 50 hours using off-the-shelf 30µm parameter set for GE Additive Powder.  Following post-processing of the parts, which was also handled by AM Kyburz,  the additively manufactured parts were successfully installed onto AMZ’s “mythen” race car.

“We printed those very complex and massive parts the first time right, and within a record time,” Hofer explained. 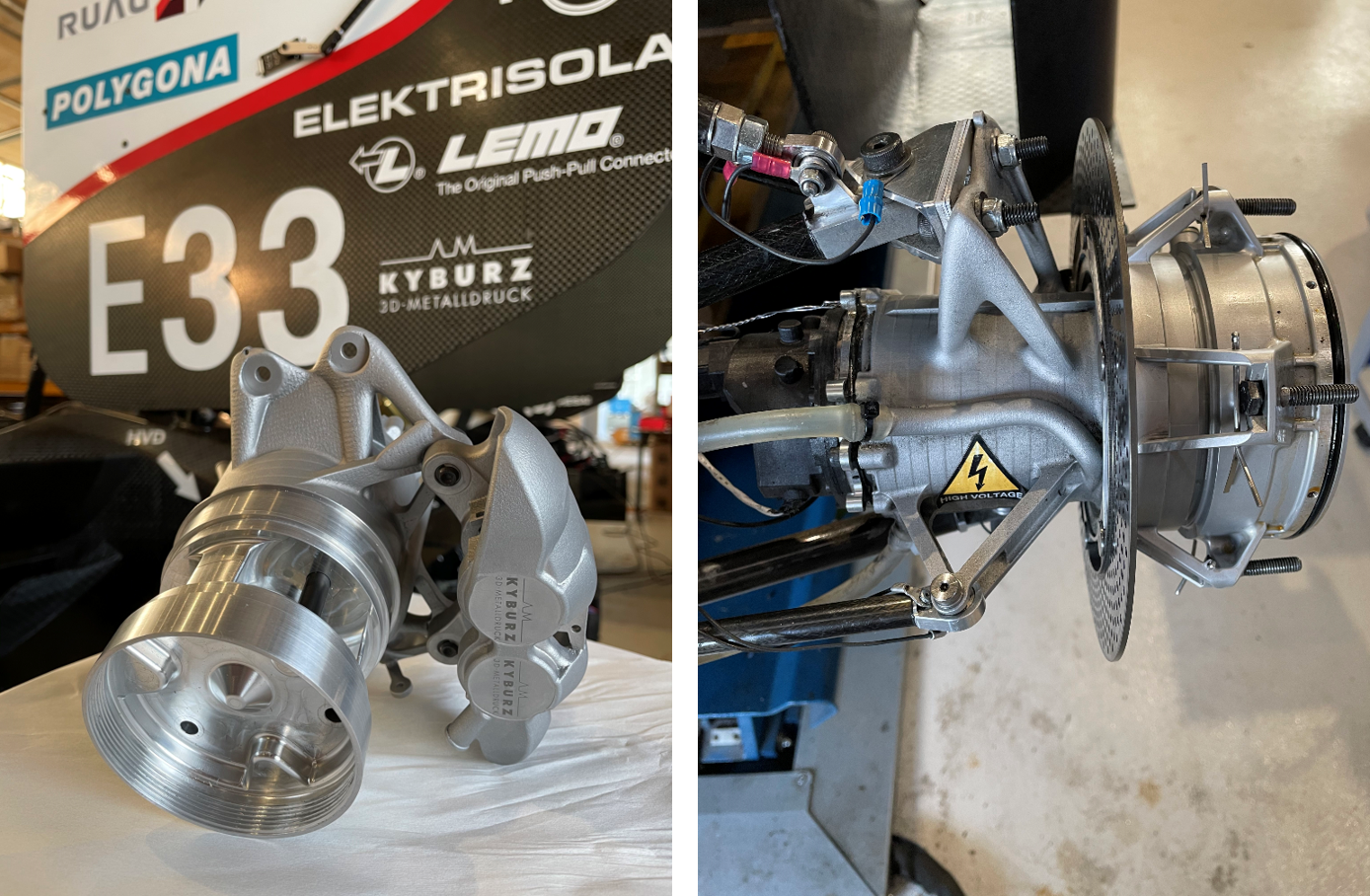 This breakthrough sets the team up for success as it prepares for the 2021/22 season and the debut of its latest vehicle later this month in Dielsdorf, near Zurich.

“The upright and the brake caliper will also be used on AMZ’s latest race car, "alvier." Metal 3D printing in the wheel packaging is advantageous, due to the tight space conditions and the directly integrated cooling for the motors, as well as the exact form of the brake caliper, which does not have to be in two parts and can be lighter,” said Christophe Salzer at AMZ Racing.