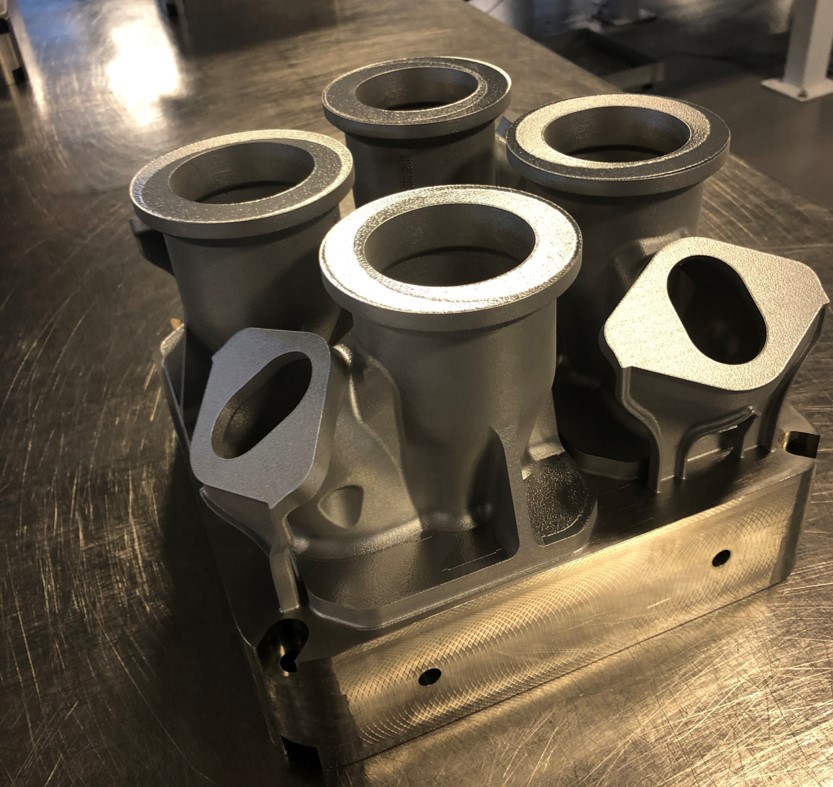 Additive Manufacturing Can Compete with Casting on Cost Alone

Most manufacturers would never dream of switching from an investment cast part to one made by additive manufacturing, especially if they already had paid for the casting mold. Yet that is exactly what GE Aviation is doing with four bleed air parts from a land/marine turbine. They made the decision based on cost and time to market.

A collaboration between GE Aviation and GE Additive is proving that metal additive manufacturing can go toe-to-toe with conventional castings on price. In fact, the engineering team expects its four 3D-printed parts will slice up to 35 percent of their cost. That is enough to justify retiring those old casting molds forever.

This is just the beginning. The project has identified scores of other parts on a variety of engines that they could convert to additive and save cost.

Additive manufacturing has been growing more competitive for years. This is especially true for new aircraft engine programs. The 3D-printed fuel nozzle tip for GE Aviation’s LEAP engine, for example, consolidates 20 different parts—and the steps needed to machine and assemble them—into one single structure. The company’s new turboprop engine took that to another level by combining an astonishing 855 parts into just 10 3D-printed components. In both cases (and others), GE Aviation took advantage of parts consolidation to squeeze major cost savings from assembling these parts.

As the number of demanding applications grew, equipment makers strive to improve the productivity of their metal laser printers, which build parts from metal powders, one thin layer at a time.

One example is GE Additive’s Concept Laser M2 Series 5 machine. Its dual lasers melt and fuse metal layers faster than a single laser alone and produce more consistent results for complex builds. The M2’s lasers are also powerful, either 400 watts or 1 kilowatt, and produce 50-micron-thick layers. It also has a large, 21,000-cubic-centimeter build chamber in which to make parts.

Improving productivity lowers cost, and so does slashing development time. “We said right up front we were going to pick a material we had already qualified,” Gatlin said. “In production, we opted for the M2 because we know it well. And we were not going to do any wholesale design changes, just some tweaks so we could print the parts successfully. We simplified as many steps as we could so the team could run fast.”

This enabled the project team to develop final prototypes between April and September 2020. Although all four parts were slated for the LM9000, a land/marine turbine derived from the GE90 turbojet, which GE Aviation is building for Baker Hughes, the group considered dozens of parts for older engines and products, too.

"Aviation companies supply replacement parts for the lifetime of their products," Joseph Moore, a senior project manager and project lead from GE Aviation, explained. "What happens," he asked, "when there are only a handful of spares left and a vendor plans to discontinue the material from which they are made?"

“We need to figure out how to come up with replacements, before we run out of parts,” Moore said. “We need to move quickly through the development cycle and create a part we can actually ship. To prove we could do it, we were put under a deadline and told to do the part as quickly and cost efficiently as possible."

“Our goal was always to look at ways to disrupt production,” Moore said. “There are only a few suppliers that make investment castings for the aviation industry, so we need to have options to ensure we’re not impacted by obsolescence and reliant on the cost models of specific suppliers. If we can make an additive part for less, we can save money now and avoid any increase in the future.”

The path to choosing those four additive parts started in early 2020 with GE Aviation’s annual audit of castings. “We are always looking to pull costs out of existing products,” Gatlin said, “so, we cast a wide net that includes hundreds of castings we buy. Then we ask, ‘Are we getting more competitive?’ ‘Are there things we couldn’t do a year ago that are now technically feasible?’”

The vetting process considered both new and older products. It considered a variety of factors, such as the capabilities of GE Aviation’s 3D printers, part size, shape and features. The engineers asked whether the parts used well-characterized materials they had worked with on those machines before. They also took into account the ease of post-processing steps, like machining to eliminate surface imperfections and brazing to add fittings to a part.

Additive is perfect for making complex parts, such as those with internal channels. Additive also works well for parts with simple geometries since they are relatively fast and easy to print from existing models, and they eliminate the up-front time and investment in molds or tooling needed for casting.

The audit looked at both low-volume replacement parts and production-volume parts for new programs, like the LM9000 engine.

By February 2020, the GE Aviation team had already identified 180 cast parts for which they thought 3D printing could potentially save money. To make sure, a team of GE Aviation and GE Additive engineers, each using their own organization’s production and financial models, split into small groups to calculate the ROI on printing each part.

Then COVID-19 swept the globe.

Production in the Pandemic

The virus upended production worldwide. At GE Aviation’s additive production facility in Auburn, AL, where parts for other GE Aviation engines are made, the pandemic presented an opportunity for the team to focus on other projects. Unexpectedly, they had machine and post-processing time available to start making parts. The project was born to take advantage of those machines.

“We’re a production shop and would not see a project like this until after GE Aviation’s Additive Technology Center had developed the process for low-rate production,” said Jeff Eschenbach, a senior project manager and project lead at the Auburn facility. “What was different about this project is that we took this on from the very beginning. It created an opportunity for the engineers here on site to get involved.”

The formation of the team kicked everything into high gear. Dozens of parts had passed the initial screening. Additional analysis down-selected nine parts from them. They included parts on other marine-industrial gas turbine engines, regional jet turbofans, and some military programs. The parts were all made of either CoCr, an alloy of cobalt and chrome widely used for hot-turbine parts, or Ti-64, a stiff, lightweight titanium-aluminum-vanadium alloy used for structural parts. They looked only at parts that could fit inside the Concept Laser M2 machine.

The team then narrowed it down further, prioritizing parts-based on engineering resources and the importance of cost savings to the engine program. The team settled on four parts - adapter caps for the LM9000’s bleed air system - which became the focus of the program at Auburn.

All four were about 3.5 inches in diameter and about six inches tall. They would be made of CoCr to handle the hot compressed air from the turbine’s compressor section.

From a manufacturing standpoint, they shared a base geometry and similar features. The team assumed the M2 could print three parts at a time, but engineers soon redesigned the build plate layout to increase it to four. This immediately boosted productivity, because it takes about the same amount of time to print four parts as it does three parts.

"Using simulation and analysis, the team showed that the parts performed the same as the cast parts they replaced," said Steve Slusher, a GE Additive manufacturing engineer on the project. The team also built test bars with each print, some in the open cavity of the cap that went down to the build plate, so technicians could measure the integrity of each production run.

The project was a major success. It marked the first time GE Aviation had shifted production from investment casting to additive manufacturing based strictly on cost. "The parts were one-to-one replacements, without any redesign or parts consolidation to improve their economics," Gatlin said. "And it was done fast."

“The thing that stuck out to me,” Eschenbach said, “was that we could take an existing casting design, replicate it quickly on our printers, and within weeks of starting on the project, the final parts were the same quality as to their cast counterparts. This project serves as a template for future work.”

Kelly Brown, senior technical leader at GE Additive agreed: “From a business perspective, Auburn showed muscle we didn’t have in the past, and now we have a bank of parts that we can go after next. What the team has done is remarkable, and it really showcases their capabilities.”

Switching investment cast parts to metal 3D printing is something most manufacturers would never dream of doing. But GE Aviation and GE Additive engineers did, and their new reality promises to save them time and money for dozens and eventually hundreds and thousands of parts throughout all their product lines.